The Perks of Community College 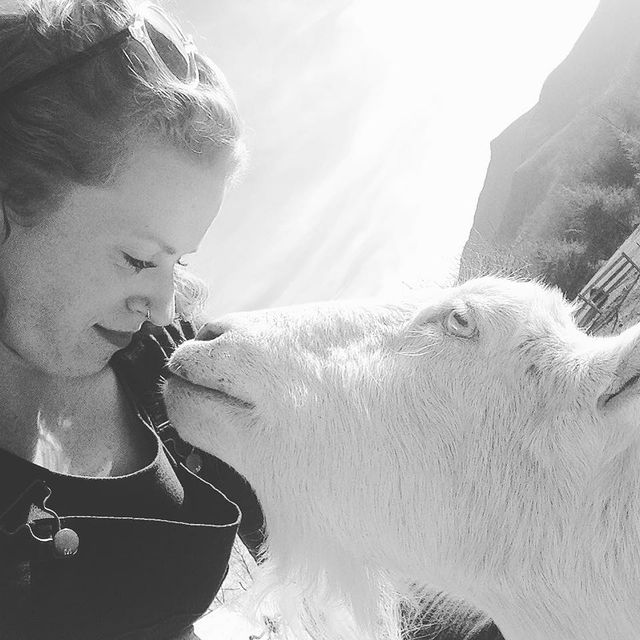 Photo: Like many students in rural Appalachia, Molly had responsibilities at home, such as caring for her farm animals. This made Mayland Community College a great option for her as she began her college education.

Even though people had been asking me my entire life what I planned to do when I got older, I honestly hadn't given it much thought. I had considered becoming a yoga teacher, a hairdresser, or maybe a farmer. I didn’t start preparing for my next steps until the middle of my second semester of senior year. All my friends had already been accepted to their schools, but even that didn't push me towards making any decisions. I am a first-generation college student, and one thing I have learned since serving in this role as Appalachian College Advising Corps adviser is that parents who didn't go to college likely don't know anything about the timeline for it. Like so many of my students, my parents just were not able to help me in that way. Last minute, I decided I would enroll at Mayland Community College. It seemed like a good decision and was honestly my only option. I hadn't tried very hard in high school, so I also wasn’t sure if I was academically ready for a college load. I had no idea how it would differ from high school. I tell students on a daily basis that starting at Mayland Community College was the best decision I have ever made.

In my first semester at Mayland, I only took four classes. That really gave me an idea of what college would feel like without completely overwhelming me. One of those classes was college transfer success. I had a lot of friends who thought it was a complete waste of time, but there was so much I learned in that class that really helped me transition to a four-year school. I learned how to send an email properly, how to plan out my schedule, and that I should always keep my syllabus. My teacher had us all write letters to ourselves and told us that she would mail them in a year. She said to think about where we saw ourselves in a year and to visualize what we might be doing. At that point, I was set on transfering to a four-year college, and so I knew that my life would be quite a bit different in a year. I ended up writing a pretty long letter to myself. I wrote that I hoped I was settled into my new college and making lots of friends. I was so surprised a year later to get that letter in the mail while I was attending Brevard College. I was well into my second semester. I had been protesting in DC with a student organization on campus and had just gotten back to campus and found it in my student mailbox. I was immediately grateful for the time I had at community college and everything it prepared me for.

During my first year as an adviser for the College Advising Corps, I spent a lot of time  encouraging students to go straight to a four-year school. When reflecting back on my own experience, I thought that if someone had encouraged me to go to a four-year school, I might have been able to make it work. I know that many students feel like going to community college is less prestigious than going to a four-year school, or that the classes aren't as hard so you won't be prepared. I spend a lot of time at Mitchell High school debunking that myth. My classes at Mayland were just as hard as my classes at Brevard, but at Mayland, I was given a lot more attention from professors. They knew me, knew where I was from, and knew what my plans after their class were. They used all that information to shape how they interacted with me and to also set their expectations for me. All my professors at Mayland knew that I wanted to transfer to a four-year college, so they made sure that when that time came I was ready to do that.  It took about a year of me reflecting back on how life-changing the experience was for me before I realized that, for so many of my students, it could potentially be a much better fit. Instead of pushing them towards a four-year option, I spent more time really trying to connect with them on where they pictured themselves in a couple years, just like my professors at Mayland had done for me. Not only has this approach helped me get to know my students better, but it has also helped me to connect them with a post secondary plan that is realistic for them and where they are right now.

For me, transitioning straight to a four-year school after high school just wasn’t an option. I wasn’t academically ready, and I had commitments at home that stopped me from moving. I thought that was something negative about me, or the way I was raised, but it just took me experiencing a community college to know that it is just as good as starting at a four-year school and, depending on the student, might be an even better option.